Burning Man is described “as an experiment in community and art, influenced by 10 main principles,” two of which include “radical self-reliance” and “decommodification.” Veteran Burners might be surprised to learn that Amazon now delivers to the Playa.

Below is a photo of a package received by a camper at 3:30 and Arcade, Scoundrel Lounge Illumination Village: 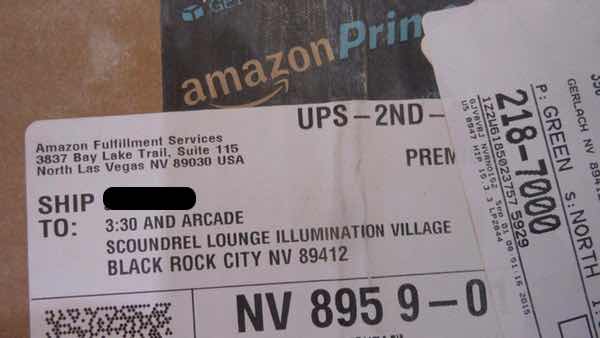 Flee the Jungle co-founder and four time Burner Kali Snowden said: “I’m sure people buy all sort of sh*t at Amazon for the festival, like blinky lights and such. But Burning Man’s supposed to be about self-reliance and DIY, not about buying a bunch of stuff online.”

Hear that Burners? if you need stuff for the festival — kill your Prime account and find alternative shops through us…BEFORE you go! After last month’s New York Times’ expose, it’s no longer ethical to shop at Amazon anyway.

Amazon now shipping to #BurningMan: So much for self-reliance and decommodification http://t.co/dz8YfkKJJt pic.twitter.com/Ds9yOp1gLU

Jeff is currently a technology consultant, writer and activist residing around the Pacific Northwest.

You have Successfully Subscribed!